During a trip into New York City I was inspired by the many faces and varied gestures of Humanity along with the sights and sounds of the city.  Thus began the city series (although my camera is always poised, at any location, to capture a Being or Beings, in the moment of their doing).
I am now grateful for the tedious drawing exercises in college that required us to employ x-ray vision  peering through our models to render their skeletal and muscular systems.

Back in New England


This seafarer became the subject of a bit of 'photo stalking' at the docks in Plymouth, Ma.  I captured many illuminated seacoast references of this local character.
(In the end, he did become aware of my camera although I never spoke with him.)

Down the Grand Canyon

The rest of the world 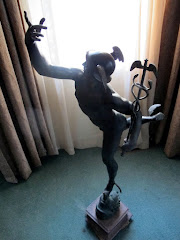 Wing-footed messenger, Mercury, holding the healing Caduceus. Art Via Winged Feet is in tribute to my maiden name, Mercuri. Also, the symbol in my signature represents the astrological sign for Mercury. 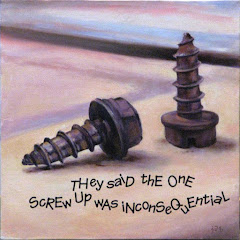 Can't rightly say what impelled me to paint screws (in nursery colors yet!) but they have come to hold a wisdom quote, "They said the One Screw Up was inconsequential". Should your workbench, or nursery, desire a painting of screws without wisdom, the letters are removable. Update: SOLD! This painting was purchased by a screw inventor/manufacturer who had made an initial design mistake. It was clearly his.